Fuente Tójar may not be the place you first think of when you go on holiday in Andalusia, but because of its convenient location, close to nature and between the main cities, it is certainly a place from which you can go in all directions. It offers few amenities but there is a small supermarket, a tapas bar and a cash machine; however, the bar, part of the municipal swimming pool center, serves a variety of tapas and acts as an indoor and outdoor square. Fuente Tójar is the closest to the city, the baroque pearl Priego de Córdoba, the city with the most facilities in the region. From Fuente Tójar, Priego de Córdoba is less than 15 minutes away.

The capital of the Subbética region, offers a fantastic location on a plateau overlooking the Subbética mountain range. Although the history of Priego is more than 8,000 years old, the city came to the fore in the eighteenth century, when the wealth of the silk and textile industry financed the construction or conversion of the baroque churches and buildings for which it is famousMost of Priego’s monuments are within walking distance of the old town, built on the edge of the plateau around the Moorish castle from the thirteenth century. In Priego de Córdoba you have a beautiful historic district, Barrio de la Villa, and a baroque fountain Fuente del Rey.

The Barrio de la Villa district dates from the time that the Moors lived here. It is the old center of Priego de Córdoba. Barrio de la Villa is partly walled and consists mainly of winding streets with whitewashed houses. This place is romance at its best! As a visitor, a walk through this originally Arab neighborhood is a journey of discovery of beautiful places. The highlight is in our opinion Balcón del Adarve. This arched street is located on the northeast side of the village. Because of the height of 55 meters there is a free panoramic view over the surroundings of Priego de Córdoba. Via the beautiful street Calle del Rio you can walk to the Fuente de la Salud and the Fuente del Rey. Along the way you see a number of beautiful and sometimes stately Andalusian buildings. The two fountains date from the sixteenth and the beginning of the twentieth century. The place where they are located is mainly seen by the imposing Fuente del Rey as one of the most beautiful places in Priego de Córdoba. Some tourists even drive to Priego because of the fountains.

Jaén is the capital of the province of the same name, in the Andalusia region, at 573 m south of the Guadalquivir. The city is located in the most important olive producing area in Spain. There is large-scale trade in and processing of olives. The city has declared itself the world capital of olive oil, thanks to the large amount of olive groves in the province. The Provincial Museum is known for the archaeological finds and the visual arts. There is also an ethnological museum. In the city, numerous remains from the Moorish occupation period can still be seen. There are parts of the old Moorish fortifications, a water basin and an old minaret at the church Santa Magdalena (15th century), in mudéjar style, and baths from the 10th-11th century. Jaen has spectacular nature parks and impressive cultural routes. It is also known for the famous olives grown here, which is also an exceptionally tasty olive oil is made.

Seville is 204 km (about 2 hours and fifteen minutes drive)

Jaén is 41 km away The nearest airport is Federico Garcia Lorca Granada-Jaen Airport, 46 km from the property.

For flights: Ryanair, Transavia or Vueling

Discover the Subbética Cordobesa in the heart of Andalusia The Sierras Subbéticas Natural Park is a nature reserve south of Córdoba, in the heart of Andalusia. It is a mountainous area with mountain ranges (for example the Sierra de Cabra with the highest point El Pichacho at 1217 meters), vast valleys, lakes, olive trees, almond trees, typical Mediterranean vegetation and many different animals. Around the Sierras Subbéticas are the municipalities of Almedinilla, Benamejí, Cabra, Carcabuey, Doña Mencía, Encinas Reales, Fuente Tójar, Iznájar, Lucena, Luque, Palenciana, Priego de Córdoba, Rute and Zuheros. Together with the nature park they form the tourist area “La Subbética Cordobesa”, the Subbética of Córdoba. An area that is rich in nature and culture. Here you can taste authentic Andalusia with its relaxed lifestyle, delicious gastronomy, Moorish influences, etc.

Via Verde Subbetica, a walking and cycling route through the province of Córdoba (Andalusia) An old railway line runs through the Subbética Cordobesa, which used to be used to transport olive oil. However, this railway has not been in use for many years. It is one of the railway lines that has been converted into a “Vía Verde”, or “Green Road”: a piece of old railway that is now used as a walking and cycling path. The Vía Verde by the Subbética Cordobesa is very appropriately called “Vía Verde Subbética”. It is a beautiful route of 56 km long that goes past olive groves, caves and castles, over metal viaducts, through the Sierras Subbéticas nature park and some of the above mentioned villages and beyond the nature reserve Laguna del Salobral. Detailed information about the Vía Verde Subbética can be found on the website of Vías Verdes.

1 From Cabra to Horconera, from Priego de Corboba over the mountain top Tiñosa to Cabra

2 Cañon rio de Bailon, from Carcabuey to Zuheros via Navazuelo, Fuentefria and through the valley de Bailon.

4 Sendero de Buitreras. a walking route that takes you past the locations from where you can view the vultures.

5 Via Verde del Aceite, is an old railway that is now used for hikers and where you can cycle very well. It is an old railway from Puente Genil that takes you all the way to Linares in the province of Jaen. at different locations you can come on the old railway like eg. Lucena, Cabra, Estacion (with restaurant) de Luque, Zuheros, Alcaudete, Martos, Jaen.

March 19 San Jose This day was tradition in Fuente-Tójar, to eat with family and friends to the place called “La Zarzuela”, but since in 1974 the “Hermitage of San José” was built in the Cerro de la Mesa, this became the place to to celebrate this party and to spend the day there, to barbecue, to visit the saint and to enjoy the views that this place offers us.

May 15 Real Fair The Real Fair of Fuente-Tójar lasts four days, always including May 15 (Patron party), and the rest of the days are variable, so that it always coincides in the weekend. During the fair we find a wide program of activities for all ages … cultural, musical, sports, etc … In this festival we find one of the most unique and ancient traditions of the province of Cordoba, the San Isidro dancers, who in number of eight and dressed in printed skirts and colorful paper hats, dancing on different occasions, with the accompaniment of guitars, castanets, tambourine and violin, for the image of San Isidro Labrador during the tour of the procession that takes place on 15 May. This dance won the First National Prize for Old Dances in Madrid in the 1960s. 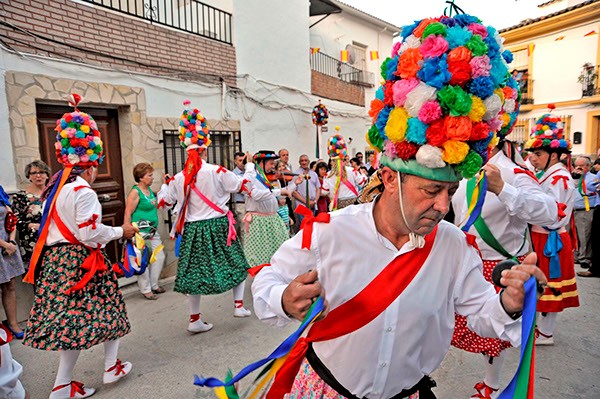 The 1st weekend of August, Fiesta de “La Cruz” de la Cubertilla. This party is celebrated on the first weekend of August in a small scattered municipality. Visitors from different municipalities come here to the procession in honor of the Holy Cross, to roast the sardines that are offered Friday Friday to all present and to enjoy the music of the orchestras. It is worth mentioning the race of the horse tapes, a remarkable and striking activity that has been taking place for several years. 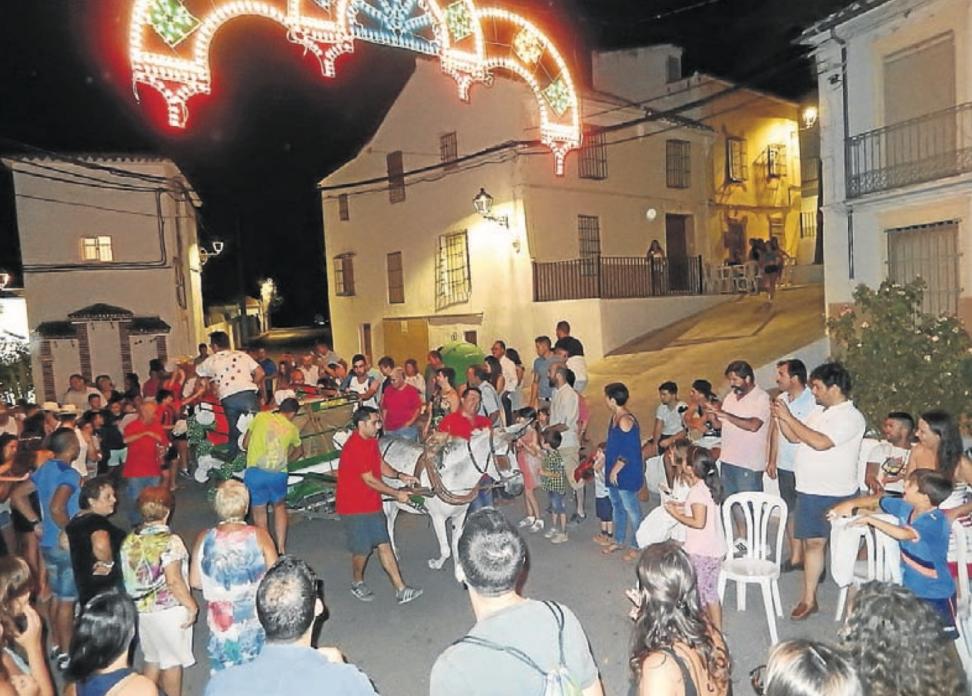 This unique festival is celebrated in the second weekend of August. This festival has been held since the late 90s and came from the idea of ​​friends, who made it a kind of tribute to all emigrants who have been leaving Fuente-Tójar for years in search of work. This party was initially only a gathering of friends who shared a meal together. The neighbors were also involved, and so it has gradually become one of the most visited festivals in the region over the years.Years ago, the Cultural Gastronomic Association “Friends of the Caper” and its members, with the cooperation of the city council, responsible for organizing such a party, created the peculiarity that a meal for everyone is performed on Saturday. The people who buy a ticket for a symbolic price get a can and a clay plate. One can pick up the dish that is prepared that evening and enjoy free beer, sangria and soft drinks. Another unique part of this festival is the parade of “la borriquita del vino” that travels through the streets of the city, accompanied by a charanga that distributes trinkets and presents among children.